Back to All Fishing Gear Articles  \  Uncategorized  \  Lake Erie Steelhead

This past weekend, my dad an I headed up to Cleveland in pursuit of ‘chrome’. The water conditions were not the best though. All of the Lake Erie tributaries were very low and clear. Since big rains bring fish in, most of the fish in the rivers at this time were fairly old and sluggish due to low water temperatures. Despite the conditions, we were successful. 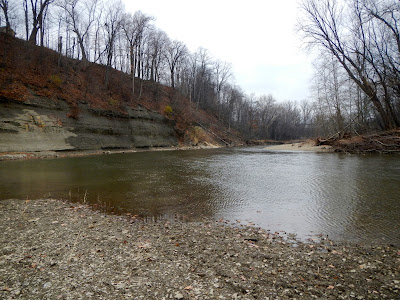 We started on Friday at the Rocky River. The Rocky consists of many low dams which have deep pools right below them. Since there were very low water conditions mixed with water temperatures in the mid to high 30s, most of the fish were hanging out in these deep pools waiting for rising water to complete their runs. In cases like this 90% of the fish are in only 10% of the water. So our challenge was to first find their holding pools and then find the right fly to tempt these slower, spooky fish. After about two or three hours without spotting fish, we came to the conclusion that we needed to change our plans. We were tempted to drive up to the Cattaraugus in New York because of good water conditions but soon realized the extra drive would not have be worth it so we settled on fishing the Grand River the next morning.

﻿﻿   Again keeping conditions in mind, we thought that fishing closer to the mouth in the deep pools would be the way to go. Thanks to the help of a local bait shop, we were able to locate the first set of riffles on the Grand. In theory, the fish would be waiting below this nearly impassable obstacle in the low water and in the pool below it. As soon as the levels would rise, they would cross the barrier and start the run.
Saturday, we fished during the early morning into the afternoon. During the first few hours, it was like we were on the Rocky all over again. Then suddenly as I was swinging an egg-sucking leech through some current, I got a hit. The fight was pretty intense. I ended up landing a nice 27″ buck Steelhead, though there are some true giants in the creeks. Not to long after this my dad lost an estimated 30″+ inch fish as it was coming to net. I also managed to break one off that took an egg-nymph rig. 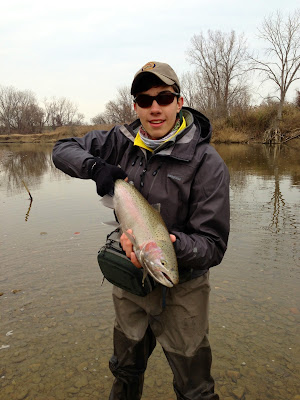 Even though our trip was not the one we had hoped for, we still had a lot of fun just getting out for our first time this fall. We were able to learn about low water fishing and secrets for landing fish during these spells. Hope to have a new report during late December after our next trip. If you want to talk Steelhead, give me call at the shop. I will be happy to answer any questions I can. 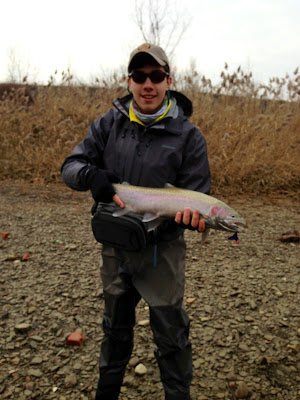 Hi John,
This is Luke. If you have any more specific questions, you can e-mail us at shop@bestgear.com. Thanks.

My name is John and I have a quick question about your blog! Could you please email me?