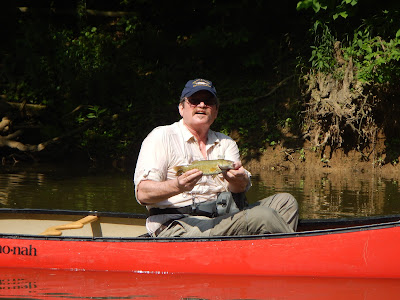 Elkhorn Creek
I had a guide trip on the Elkhorn creek today with Jeff Mossbarger and Ted Hendricks. Fishing was tough, but I think we had good time for the most part. I think I owe these guys a few fish.

When I checked the gauges yesterday they read around 155-170 CFS; when we pulled into the canoe livery today they read nearly 270 CFS!  Water depth was fine and actually made floating the river a bit easier.  Unfortunately, high CFS readings usually mean low water clarity.  Clarity was not terrible, but could have been better.  Ted saved the day with a few good fish on topwater.  Despite our tough day on the stream, I was really impressed with how much both of these guys improved their casting and fishing skills throughout the day. 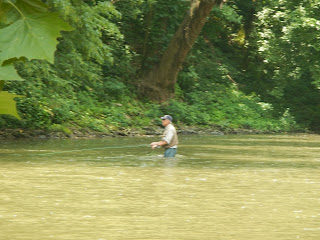 While sitting in traffic on Columbia Parkway on the way home, I spoke to a fishing buddy for a bit who mentioned that there might be a few hybrids left in the river system.  I figured I needed a bit of rod and reel therapy after a tough day on the Elkhorn.  I got home about 6:30, ate a quick sandwich, mowed some green grass and then took to the river.  Alexander and his dad were already there trying their luck.  After a bit they took off and I took my favorite spot.  Within about fifteen minutes I landed a five pound hybrid.  I didn’t get a picture, but it was a decent fish and definitely deserved the Sage Xi2 8 weight.  The next fish I hooked had super solid feel and I guess I horsed him a bit much since before I knew it he had broke me off. Hard to guess how big these fish are since they are so powerful.  Caught a few more little guys over the next hour or two.  I was fishing large Clouser minnow in chartruese and white on an Intermediate line with a short heavy leader.  Water clarity was a bit low, but levels were great.  Rain tonight might screw that up.  Sure has been a hard summer so far for warm water fishing.  All in all, I landed 3 and broke the big one off.