My Dad and I were planning on heading up to Cleveland today and tomorrow to chase the fall run of steelhead; but unfortunately heavy rains made most of the rivers unfishable. We decided to stay home and head up in a few weeks during the heat of the fall run. We then went over to the Brookville Tailwaters in Indiana to do some trout fishing. This ended up being a smart decision.

The water conditions over at Brookville were not the best. The water was low but murky. The gauges reported the water at only 2.74 ft but the water was still murky due to all of the rain that the tristate received over the weekend. It was drizzling for the first hour or so and then the sun finally broke through and started to heat up the air temperatures which was nice.
The whole day I targeted the riffles and runs. I used nymphs and streamers consistently through every run and riffle the whole day. I had both my Sage ESN 10′ 4wt (nymphing) and my Sage ONE 6wt (streamers) set up. Due to the slightly off colored water, larger and brighter nymph patterns seemed to do the trick. I was also able to get away with 4x fluorocarbon tippet because of the conditions. To start off the day, I caught my first fish on a black wooly bugger dead-drifted under an indicator. 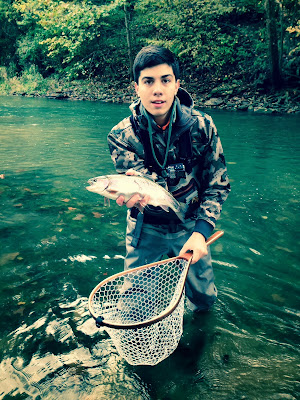 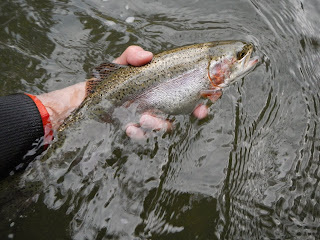 Many of the fish, due to the murky water, seemed to hold close to structure such as underwater ledges, rocks, and shade from tree cover. As well cover, defined seams in the river, such as bubble lines, were also key places for the fish to reside. As we moved up to the next set of riffles I changed my rig from a nymph and bugger to a green rubber legged Copper John with a small black stonefly nymph as a trailer. In the next set of riffles, I was able to pull out two nice rainbows who fell for both the Copper John and the black stonefly. Both of these fish were in the same seam right under a tree along the opposite bank.

As we continued to head upstream, we continued to catch more nice rainbows and even a nice brown. At the last riffle, I decided to throw on a small white Sculpzilla streamer. This time, instead of an indicator, I swung the fly through the run. This brought a nice rainbow to the net.

The fish were sure in feeding mode today. I did not catch a fish under 14″ with the biggest being 17.5″. This is a great time of year to head over to the tailwaters for some trout fishing. These cool temperatures bring the big boys out to feed so they can bulk up for the cold winter. If you have any questions please feel free to call the shop at 513-871-3474. Good Luck! 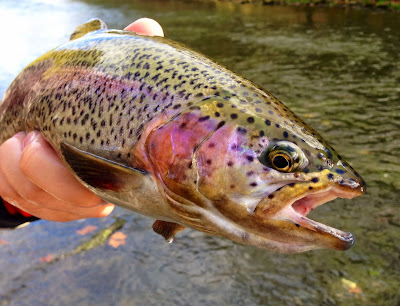